X
This site uses cookies to provide and improve your shopping experience. If you want to benefit from this improved service, please opt-in.
More Info
Accept Cookies
We Will Match Any Genuine Price
Follow Us On Twitter For News & Updates
Read Our Reviews On Trust Pilot 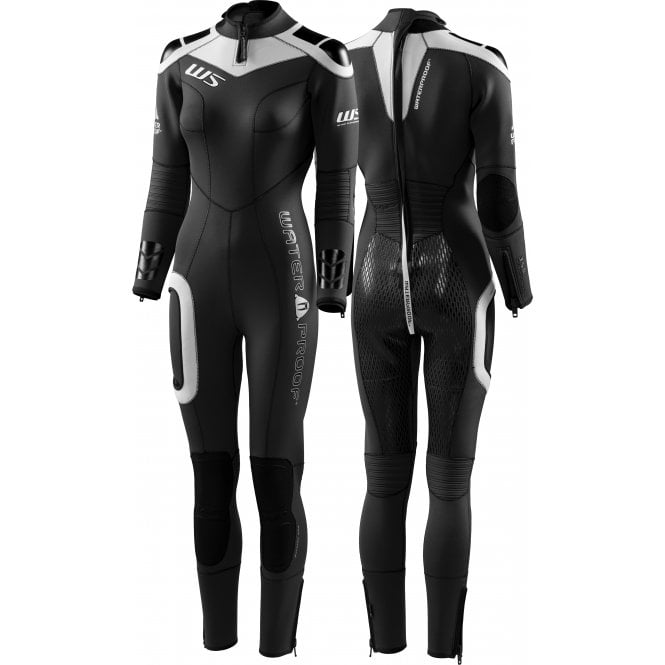 Code: WP0352
Item in Stock Item out of Stock | Usually dispatched within 24 hours
Loading...
Order within for delivery on Monday 2nd August
Ask A Question
Email A Friend
Price Match

We believe buying a Waterproof suit is smart. The W5 3.5mm has been designed to set new standards in performance and style, and is made with the same high quality standards as our top-of-the-line suits. All packed into a smart and stylish Scandinavian design for the diver who demand the best and not afraid to show it.

The W5 includes all the features you have come to expect in every Waterproof product like high quality material and anatomical fit. It is made of high stretch Nylon/Elastane with 100% Microcell CR Neoprene, handmade, glued and blindstitched. Additionally it includes all of the features from our heavier lines like a comfort zipper in the neck, flow guards in the wrists and ankles and embossed Duratex flexible kneepads and elbow protectors.

Soft and flexible - yet compression resistant.

DuraTex reinforcements at knees and elbows.

Zippered openings at arms and legs (YKK), for easy donning of the suit.

Comfort zipper on the front to relieve stress on the surface.

PU Anti-Slip on sleeves for keeping your computer in place.

YKK No10 Vislon back zipper.

Code:
Welcome to Waterproof, producer of award winning high quality diving suits and accessories. Waterproof was established in Göteborg, Sweden 1984.
The secret behind Waterproofs success is very simple. We do our own diving!
That is the only true way to find out where the need is and adjust according to it.
Hands on experience, built right into our suits, together with a never ending curiosity of how to extend the limits of diving.

That is what we call Facing Reality


1984 THE NEEDS OF VIKINGS
Diving and Windsurfing were the latest trends and the need for quality repair and alteration to neoprene suits opened up an opportunity for a small repair shop to grow its business. Even though the interest in diving was expanding, the neoprene suits that were available in the small number of dive shops in Sweden seemed to cater to the Southern European climate – definitely not suits equipped to outfit the needs of Vikings. Within no time the business for alterations increased as divers constantly asked for additional features modifications, and now unexpectedly colours started to be "an mode". Eventually the alteration shop realized it would be simpler to produce an entire suit with colour options that included everything divers were asking for – thus, as the first vendor to offer colour options, the idea of a designed Waterproof suit collection was born.

1989 - NEW FACILITY AND MORE EMPLOYEES
The overcrowded WP shop was abandoned for a new larger premise with additional machinery, new staffs were trained and within no time a production line was in place with cutting, gluing and stitching at one end and shipping at the other. Eventually there were 15 people involved in suit production and Waterproof was recognized as a bona fide suit brand.The geographic spread of the Brand started to widen, but still Waterproof thrived mostly on the Scandinavian marketplace. It would take ten more years before this market picture totally was changed. But still, learning by doing and diving, step by step Waterproof struggled to gain the skills and experience needed for the conquering journey into the world wide Abyss.

The change in Global economics and an outgrown production plant in need of investment created some difficult decisions for Waterproof as the local European neoprene vendors faced pressure from new plants in the Far East creating longer transport times on material and less flexibility. The decision to move production to the raw material source and capitalize on the growing amount of OEM manufacturers in Taiwan and Thailand liberated the Swedish team from numerous problems associated with production and allowed concentration on R&D and design. The first expedition to Antarctica commenced and development of Drysuits appropriate for extreme conditions was initiated. Even if the Waterproof Brand name by now was internationally recognized, it was still five years yet to go before the formidable world wide breakthrough happened.

The focus on design and R&D had created a problem as new technical solutions were leaked via the OEM manufacturers to competitors. To eliminate this problem Waterproof decided to exit mainstream production and only focus on high-end quality suits. This forced Waterproof to source a controllable production facility and led to the joint venture between Waterproof and an established factory in mainland China, resulting in the launch of the ZOR collection. During the next 5 years Waterproof became a major player in the European diving market with a new sales office in Germany. During this period Waterproof also gained its first International recognition with the receipt of the 2003 Tauchen award. Since that year Waterproof has topped the list of first place winners as the number one wetsuit brand in Europe.

To celebrate 20-years as a manufacturer Waterproof launched a new collection, named from stars, the Lynx, Aries, Sirius, Draco and Taurus that soon became the best selling premium suits in stores from Russia and Poland to Greece, the UK, Netherlands, France, and Italy. Although there was still a focus on Central Europe and Germany, over the next 5 years Waterproof expanded to a Sales office in the US with a warehouse in Tampa, Florida and distributors around the globe in such places as Australia and the Philippines. Waterproof also began to focus intensely on accessories resulting in the Crux Gloves and the vented Hydra Hoods that once again changed the industry standard. As a result Waterproof was voted European Number One Brand every year at the Tauchen Award gala in Düsseldorf. A 20 year long struggling journey from being the local suit tailor to a well recognized and respected World Wide Brand name had reached the final destination. Now the future began, the route back was sealed.

Looking into the mirror with 25 years experience as a vendor and developer of high-end Diving Suits, Waterproof came to the obvious conclusion – a constructive R & D, a rock solid Business/Marketing Policy in combination with a brutal non compromising Quality set-up is what have made Waterproof a world wide market player. The respect and all the awards comes not from cheap mass production, copy and making me-too's, or following the stream. The history clearly shows that Waterproof have gained the success by thorough and skillful investments in the R & D department. And in the economic devastating times when everybody did nothing, Waterproof did everything. Invested more competence into the area where the best pay-off is, the R & D. The result is evidently. Launching two new wet suit platforms W1 and W2. And a new Drysuit platform, the Hybrid D1 with several patented features. The new silicone seal system and the genially constructed thermo protection will undoubtedly set new standards for the Diving industry. The new era of Waterproof products are built on a stabile, now enhanced, competence background, and will be seen on the podium at future Award Galas, like they been present since 2004. To celebrate this step into a new Waterproof era we launch a new graphic profile and a new logo to really show we mean serious business.

Free UK Mainland Delivery on orders of £50.00 and above

Take advantage of our free UK Mainland delivery offer when you spend £ 50.00 or more*

Parcelforce 24, and Special Delivery services are excluded from this offer

We reserve the right to withdraw the offer at any time

Next Working Day Before 1pm

Approx 2-10 Days Depending on destination

Parcelforce Euro Priority - Up to 25kg
If in doubt, just contact us and we can let you know a timescale
Depending on country, this service can take anywhere between 3 and 6 days on average

Denney Diving is committed to providing the highest quality products and service. However, on rare occasions products may be found to be faulty or defective. If any product is found to be faulty or have defects upon delivery, You will be entitled to a free of charge replacement or full refund (including postage fees incurred) within 30 days of receiving product. If a product is returned to us, and following the testing process, the product is found to be in good working order without defect or fault, we will return the product to you. All returns must first be authorized by either telephone or e-mail, after which you will be given a returns number which must be quoted with all returned goods. Any goods returned for either exchange or refund can only be dealt with after a authorization number has been issued.

If a product you purchase from us turns out to be unsuitable or the incorrect size for you, we will provide a free of charge replacement or full refund, provided they are returned in a new & unused resalable condition within 7 working days of the date of receiving your order. When returning goods to us, the customer will incur any postage fees. If we arrange to collect the goods for you, the cost of our postage to do so will be deducted from the refund. Please note that we do not refund postage for unsuitable or incorrectly sized goods.

When returning goods to us, the customer will incur any postage fees. If we arrange to collect the goods for you, the cost of our postage to do so will be deducted from the refund.

On the odd occasion we may run out of stock of certain products, but normally have more stock arriving every few days.

If a product ordered is out of stock, we will contact you asap to let you know of any shortage.

On certain occasions we may not be re-stocking / discontinuing an out of stock item ordered, and on this occasion we will contact you to let you know and either offer an alternative or cancel for a full refund.

All our payments on the site are taken using Sage Pay or Paypal, both using the latest industry standard security

No credit or debit card details are recorded during any transaction

All transactions are encrypted via a secure connection

Most people are concerned about their address being forwarded to mailing lists etc- At Denney Diving your information is always kept confidential between you and us, and the only instance that information needs providing is for the purpose of Guarantee / Warranty, which is required for certain products (such as regulators) to register your details / diving qualification with the manufacturer before use. We would not however give diving equipment manufacturers a list of all the people who had bought diving equipment from us.

When working with third parties or product manufacturers, we will not perform mailings for them. We do not give out private individuals telephone numbers under any circumstances. You can safely quote your telephone number (including ex-directory numbers) to our sales staff when buying with us - knowing it will never be passed on to third parties- the only ones who have access to your number is our Staff, which will only use numbers to contact you regarding your orders with us.

Names and addresses are very valuable, and we protect them carefully from hackers and competitors. If you ever wish to access the information we hold about you, we may ask you for proof of identity or a question regarding your order or details.